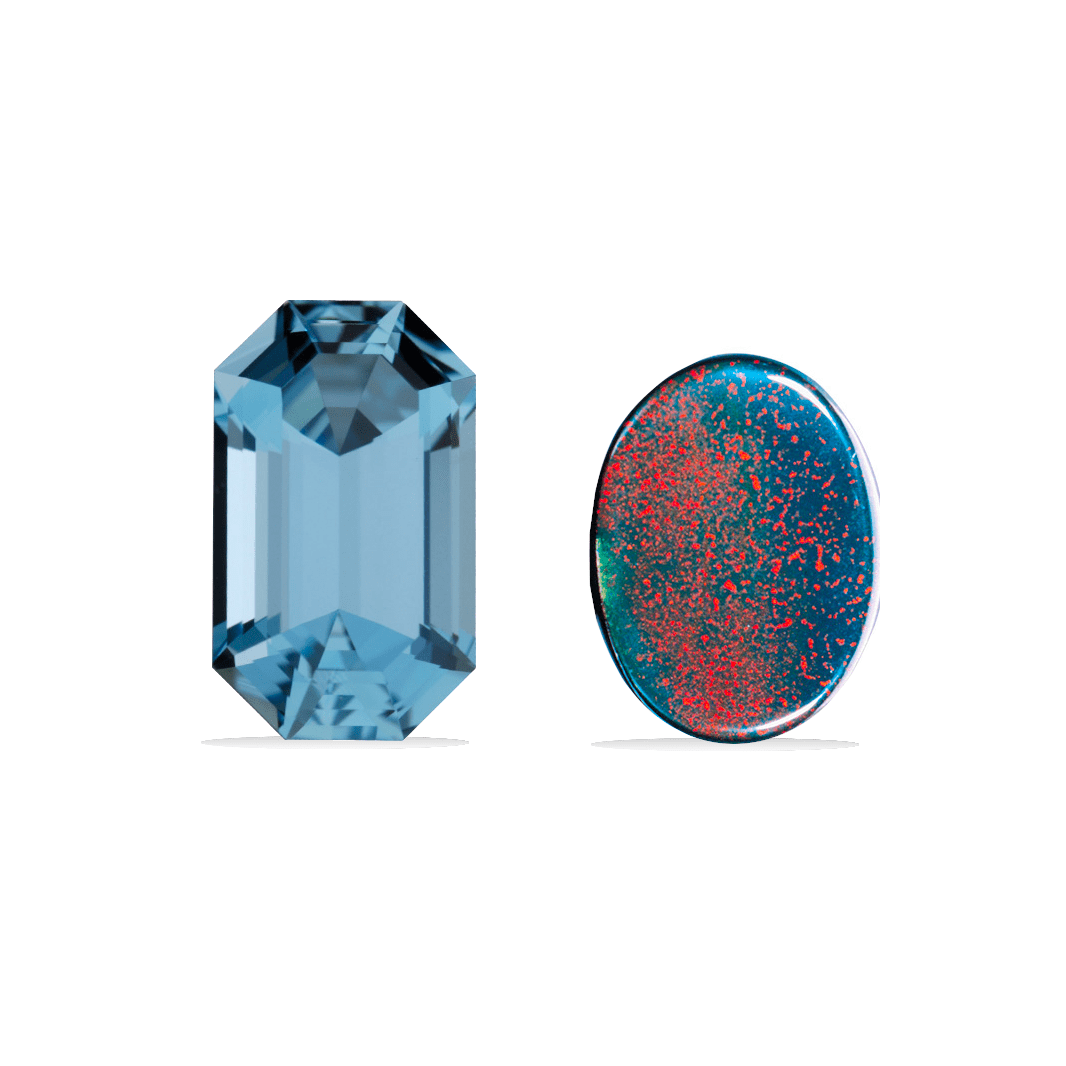 What are the March Birthstones?

Each month of the year is associated with one or more gemstones called birthstones. March’s two birthstones are aquamarine, a beautiful blue-green stone that blends well with both sterling silver, white metals, and gold. The second is Bloodstone, which has a deep green color mixed with spots of red in an inky pattern.

Here is everything you need to know about March birthstones!

The History of Aquamarine March Birthstone since the Ancient Times

The history of gemstones is inextricably bound with the history of humankind. Each stone has its own story, embellished throughout time by an endless succession of many cultures.

Origins of the Aquamarine

The name aquamarine was given by the Ancient Greeks and Latins, who popularized this gorgeous gemstone. “Aqua Marina” is an ancient Latin word meaning “seawater” and was believed to protect sailors from drowning in rough seas, believing that the stone would lose its color if any disaster befell them.

Medieval knights kept this gem close whenever they were in battle. It was also worn as an amulet to prevent illness and nightmares, making it a popular choice for collectors.

Arabs believed that aquamarine would bring its owner happiness, health, and beauty, and therefore became a favorite stone of paradise, which they called “zabargar,” meaning “seawater.”

In Peru, there exists a legend about the origin of the aquamarine stone. It tells of a woman named Rayo de Sol who was sentenced to death through burning at stake by her husband, who believed she had committed adultery. Because it made her look beautiful, Rayo changed into an aquamarine as she died. They believe that the woman who finds this stone will be blessed with eternal love.

Where can you find Aquamarine stones?

To find these beautiful gemstones, miners must move large amounts of earth and rock to search for the treasures. The aquamarine stones are then washed and sorted by hand, a very time-consuming process. After sorting, the gems are cut and polished.

Color and Appearance of Aquamarine: The Deep Blue Stones

Here are some of the names and blue hues variations of the aquamarine:

Aquamarine, like emerald, is a variety of the mineral beryl.

The formation of aquamarine begins deep beneath the earth’s surface, where high temperatures and great pressure cause grains of sand to collect together. The heavy mineral deposits are then forced into layers between other gemstones known as “mica-schist.”

The beautiful blue-green color of aquamarine is caused by trace amounts of iron and magnesium in its chemical composition.

It has a 7.5-8 on the Mohs scale, making it suitable for daily wear.

The aquamarine refractive index is 1.57-1.59, making it opaque. That means aquamarine does not allow light to pass through but instead reflects it, appearing white or bluish.

The rarity of aquamarine birthstones

The larger the aquamarine stone, the rarer it is and the higher its value. The price increases with each carat weight because large stones are extremely scarce.

The stones are considered more valuable when they turn light blue, like the color of shallow seawater. The rarest and most expensive aquamarine stones are in the lighter tones, even in an electric shade or deep inky blue.

It was also said that aquamarine could become more beautiful with age – giving it a special place in jewelry collections worldwide.

This breathtaking Split Shank Aquamarine and Diamond Ring is fit for a queen! The cushion-cut aquamarine centerpiece is simply beautiful, surrounded by dazzling diamonds in a split shank design. Whether you’re looking for an engagement ring, a statement piece for your special occasion, or just something extra fabulous to add to your jewelry collection, this ring is sure to impress.

Aquamarine jewelry has become more popular over the years. It is a stone that suits every skin tone.

The aquamarine stone is usually set in sterling silver or white gold but can also be found in yellow gold. It is known to be an elegant, attractive gemstone that has stood the test of time.

The most famous jewelry pieces containing aquamarine can be found in the British Crown Jewels collection. The stunning gems were added to the Queen Mother’s coronation crown, Diana’s engagement ring, and Catherine Middleton’s wedding tiara.

You can find or customize different jewelry pieces with aquamarine, including pendants, necklaces, rings, earrings, and bracelets.

The History of Bloodstone Birthstone since Ancient Times

Origins of the Bloodstone Birthstone

The most prized bloodstone is dark green with spots of bright red, like drops of blood. Other varieties are known by different names, such as the “heliotrope,” the “cornflower,” and the “Tyrian stone.”

The bloodstone was originally known as heliotrope or sunstone in reference to the ancient belief that when it’s held up to the light, it appears to glow with a reddish color like sunlight reflected on the sea.

Later on, the name “bloodstone” was given because it contains flecks or spots of blood-red jasper, resembling blood drops.

In Ancient Egypt, bloodstone was a sacred stone to the sun god Ra and symbolized life and rebirth.

Ancient histories filled with warriors and battles made bloodstone a popular choice for soldiers. Bloodstone was very popular in Rome, where soldiers used to polish their weapons with bloodstones to bring luck in battle. Bloodstone was believed to stop bleeding and heal wounds when worn close to the heart. It was also used as a talisman against poison, plague, and evil thoughts.

Where can you find Bloodstone Birthstone?

Bloodstone is the second birthstone for March and can be found worldwide.

Bloodstone is often found in India, where the gemstone has been mined for centuries. It also comes from Australia, Brazil, China, Madagascar, Myanmar (formerly Burma), Peru, Poland, and some parts of the USA.

The bloodstone gem comes in various shades, from dark green with red spots to light green with brownish-red. It can also come in a yellow tone, but this color is the least sought after.

Here are some of the varieties and colors of bloodstone.

You can find bloodstones in different sizes ranging from small dabs to large tumbled stones.

March birthstone Bloodstone is a type of quartz containing red jasper or red chalcedony interspersed with white pieces of calcite or white chalcedony.

This beautiful gem variety of silicate minerals is called chalcedony, making them one of the most common gemstones on earth.

It is an opaque stone with a hardness of 6-7 on the Mohs Scale. The stone’s hardness makes it very durable and easy to care for. It is an ideal gemstone for everyday wear, as its opaque composition hides scratches well.

The stone’s coloration is caused by the presence of iron oxide in its composition. Bloodstone color varies depending on the amount of iron oxide it contains, making it vary in value and intensity of its red color. The variations of color give it a unique look, making each piece different from another.

The rarity of bloodstone

The rarest type of bloodstone is the “Imperial” variety. This gem is an intense green with red spots or flecks and sometimes with yellow calcite.

The most common type of bloodstone is the “heliotrope” variety. It has a pale green background, with red spots and flecks that look like drops of blood.

The bloodstone birthstone is a popular choice for jewelry, especially since it comes in various colors, from black with red spots to green with red spots. Over 30 types of bloodstones fall under the umbrella term “heliotrope” or “bloodstone”.

All gemstones require special care to maintain their beauty. The March birthstones are no exception to this rule.

We recommend that you always take off your birthstone rings or stones when using harsh chemicals as they could damage the gems’ surface. It is also advisable to remove your March birthstone jewelry before participating in strenuous activities.

You can clean these two birthstones with mild soap, warm water.

When Should You Offer a March Birthstones to Someone?

There’s no such thing as bad timing when gifting aquamarine or bloodstone jewelry! What better way to show your beloved the genuine connection you have, than by giving them a beautiful piece of customized March birthstone jewelry.

March babies find themselves fortunate enough to hold in their jewelry collection two beautiful March birthstones. Aquamarine is the modern official birthstone for those born in March. Bloodstone can also be worn as an attractive alternative or as an addition to your aquamarine March birthstone.

If you are looking for a gift for someone born in March, March’s birthstone’s aquamarine and bloodstone are perfect for you!

March birthstone as an Engagement Ring

Why not? The aquamarine and bloodstone are beautiful stones that would make a lovely engagement ring stone. These gems are hard enough to resist scratches and can be worn every day with reasonable care.

They come in a variety of colors so that you can find the perfect aquamarine or bloodstone for your beloved one.

The March Birthstones Aquamarine and Bloodstone are popular choices for jewelry. They come in various colors and are both beautiful and durable high-quality stones.

Our specialists at Bling Advisor are eager to answer any questions you might have regarding aquamarine and bloodstone gems and jewelry. Please contact us or check our March birthstone rings and jewelry selection. 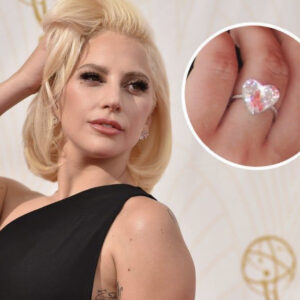 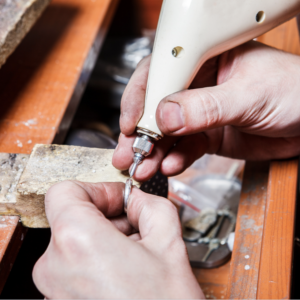 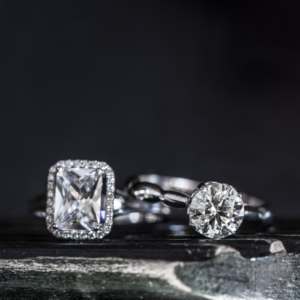